Our Government seems to have outsourced its energy policy to the Mining Council, even repeating their absurd claim that coal is the solution to world poverty. Even more disappointing, is that now PM Malcolm Turnbull, despite his previous acknowledgement of the dimension of the climate change problem, seems also to have fallen in line    . I explain more in my article here
Posted by Unknown at 9:52 PM No comments: Links to this post

Finally, some traction, after many years of talking about the health impacts of ambient air pollution. As I proposed in this Sydney Morning Herald article last week, we should be grateful to VW for putting this issue on the front page of our newspapers. AMA WA also arranged for me to do a lecture last week to their members on this topic. Also thanks to Adrian Glamorgan at RTR FM for this interview.

Outdoor (or ambient) air pollution is clearly a major public health problem even at levels regularly experienced in Australia cities, with an estimated 1590 deaths from fine particulate matter in our 4 biggest cities, about 50% more than national road traffic accident fatalities. This is of course just the tip of the iceberg when it comes to overall health impacts which hospitalise many more with heart attacks, heart failure, asthma and respiratory disease and lung cancer.

Concerningly, our air quality standards and our vehicle emissions standards are not as good as other developed countries. Agreement has previously been made to tighten these standards, but perhaps due to opposition from affected industries, government appears to be dragging their feet.

This is really unacceptable when Australians are dying and suffering preventable health problems from air pollution.
Posted by Unknown at 5:59 PM No comments: Links to this post

Reproduced from Huffington Post blog - 17/09/2015 08:25 AEST
.
The coal industry's latest PR escapade paints coal as an amazing, versatile commodity with almost limitless possibilities, providing seemingly endless energy and employment.
In case you missed it: the #coalismazing video simulates a fly-through of magnified valleys and landscapes from the surface of a lump of coal along with accompanying purring female voice-over, recasting this old, dirty, sooty rock as something futuristic, alluring and a panacea for pretty much every global ill.
I expect most will be familiar with the 'shell game', the one where a pea is hidden under one of three shells. Sleight of hand allows the conjurer to draw your attention whilst distracting you from the obvious.
This coal version might also be a mildly amusing ploy were the consequences not so disastrously unhealthy.
The deception occurs by linking energy generation generally, with its clear societal benefits, to the out-dated combustion of coal whilst ignoring the significant downsides or costs from pollution as well as the arrival of new and alternative technologies that are effectively pollution free.
It is a clever psychological trick to disguise the very real limits of coal due to its burgeoning costs into a story where the implied narrative is "there are no limits".
But burning coal to generate energy results in far larger emissions of both toxic pollutants and greenhouse gasses than any other form of energy generation.
Coal combustion is a public health disaster, contributing to the more than three million world deaths from outdoor air pollution each year. And these are not limited to developing nations. Studies in the US estimate the hidden costs, or 'externalities', from coal amounted to up to US $500 billion per annum, mostly related to air pollution.
In Australia, coal related air pollution costs around $2.6 billion annually and in the US the industry has been shown to be of little overall value to society.
Widespread release of airborne pollutants is akin to mandatory smoking for much of the world's population, indiscriminately affecting the most vulnerable in society: children, the elderly and those with existing heart and lung conditions.
The silent and mostly invisible coal product includes microscopic particles of hydrocarbons and toxic residues, carried on the wind, inhaled and then deposited deep into your lungs. The inflammatory and toxic response in lung tissue results in asthma and chronic bronchitis and now recognised as being a cause of lung cancer just as effectively as tobacco smoking.
Large-scale clinical US studies in the 1990's not only confirmed the confirmed that long-term exposure resulted in lung disease, but there was an even bigger toll in heart disease.
Air pollution doesn't stop at the lungs; it gets into the blood stream causing inflammation within blood vessels and cardiac arrhythmia.
Even before the medical science was understood, there was plenty of damning evidence directly linking coal burning to ill health. The banning of coal sales in Dublin in 1990 saw a dramatic reduction in particulate air pollution and over 350 fewer deaths related to heart and ling disease each year thereafter.
It is not an isolated example. Reduction in cardiovascular and respiratory illness and deaths are in fact consistently observed following improvements in air quality when regulation to reduce coal burning is introduced. And the benefits are apparent even where ambient air pollution is already at low levels
Coal is also the source of many other harmful environmental pollutants including heavy metals such as mercury, where it is now the dominant source of new contamination.
If that weren't enough, coal dominated stationary power generation is the single biggest source of man-made greenhouse gas emissions.
Climate change has been described in the world's leading medical journals as the greatest threat to our health this century. Increasing global heatwaves, extreme weather events result in direct injury, loss and mental health impacts, but the more insidious and far greater health impacts result from changing biological and physical systems leading to food and water insecurity and changing patterns of infectious diseases.
Our climate scientists are telling us that to keep global temperature increase to a 'safe' 2oC limit, we must leave over 80 percent of coal reserves in the ground, where they have been safely sequestered and stored for millions of years.
So the coal industry has a point; coal really is amazing, it can make millions of people sick even from thousands of miles away, it can change the whole climate of a planet. Why, as Dr Tim Senior tweeted, it can even make whole countries disappear.
Now that's a real 'shell trick'.
Posted by Unknown at 6:41 PM No comments: Links to this post

Whilst it is notoriously difficult to make predictions, it is perplexing that we are so able to accept mere extrapolations of recent historical trends, including the unscientific projections of economists and demographers, but at the same time seem entirely unable to consider how our future will be affected by many known limitations and determinants of health.

The reason for changing the focus of this blog in largely in relation to attempts I have made to discuss this with media commentators, politicians and others who repeat these assertions that we will all live longer and health lives without question. The very notion that our future health may worsen is so foreign to most, that it is rejected out of hand.

The flawed longevity assumption
Posted by Unknown at 3:51 AM No comments: Links to this post

Differences in the prevalence of obesity continue to explain about 20–35 percent of the shortfall in U.S. life expectancy relative to countries with superior levels, even when one uses much lower sets of obesity risks. http://www.ncbi.nlm.nih.gov/books/NBK62367/

(Published 2005) Over the next few decades, life expectancy for the average American could decline by as much as 5 years unless aggressive efforts are made to slow rising rates of obesity, according to a team of scientists supported in part by the National Institute on Aging (NIA), a component of the National Institutes of Health (NIH) of the Department of Health and Human Services (DHHS).  http://www.nih.gov/news/pr/mar2005/nia-16.htm
Posted by Unknown at 7:30 AM No comments: Links to this post

ACCORDING to conventional wisdom, we will keep living longer and enjoying ever healthier lives. After all, public health advances and technological pro­gress over the past 150 years have delivered these improvements. So why shouldn’t this continue indefinitely?

Our perspective has been largely restricted to diagnosed illness and number of years lived, ignoring more meaningful measures of health and wellbeing.


Our time-poor, overstressed lives and iniquitous, fragmented communities have not made us any happier or healthier.

Modern living, with its material focus, over-consumption, poor dietary choice and inactivity, has become a major contributor to chronic disease while eroding traditional, spiritual and cultural values necessary for our non-material well being.

Rates of diabetes and obesity are escalating, worsening health outcomes, diminishing quality of life, and stretching health and welfare services and budgets.

Alcohol and drug use are compromising physical and mental health, damaging our social fabric. But rather than address the causes of societal ill health, we are instead focusing on increasingly expensive, technology-based, hospital-oriented and, inevitably, unsustainable solutions. Antibiotic resistance is a prime example of why this type of exploitative thinking is so short-sighted.

It is, however, our collective impacts that create the most challenging health risks.

In just 150 years, humanity’s environmental footprint has grown 150-fold. This has come at the expense of the other inhabitants of this planet. Through loss of habitat, over-harvesting, pollution and waste, we are driving a new mass extinction event.

Food, shelter, medicines, clean air and fresh water are all natural services we take for granted. At every level our health, and civilisation, is underpinned by the myriad, interdependent, mostly unidentified species that collectively constitute natural ecosystems.

The complex relationships between potential infectious organisms, vectors and hosts are also shifting, making unpredictable the patterns of known diseases – even producing entirely novel ones, such as SARS.

Agriculture is dependent on intact healthy ecosystems and soils. Additionally, the increased yields now required to provide adequate nutrition for billions of people have resulted in unsustainable use of resources, particularly fresh water, oil and phosphate, all of which are now diminishing.

We are approaching ‘peak oil’, with its volatile, rising prices which compromise food production and availability, disproportionately affecting the poorest and most vulnerable.

Our economy and health infrastructure are also highly energy-intensive. We cannot afford to keep repeating the 20th-century mistake of chasing ever more polluting and diminishing resources. We need instead to strive for clean, renewable energy, with the health and social benefits that it brings.

Overuse of fossil fuels and land clearance has produced atmosphere-altering quantities of greenhouse gasses. The ensuing climatic disruption and ocean acidification will have profound health effects, prompting the (Nov 2009) Lancet series “Climate change is the greatest threat to human health in the 21st century”.

The timing and magnitude of these interrelated impacts may be uncertain, but the risks to human health at local, regional and global levels are at a scale not seen in human history.

All the more surprising, then, that they have been largely absent from our health expectations and planning. We are in danger of passing ‘peak health’, a time in human history where the best health outcomes recede into the past.

We cannot escape the finite planetary boundaries that define the optimal and safe conditions for humanity, but we can choose a fairer and a healthier future by living within our ecological means.

But only when we have recognised where we are going. 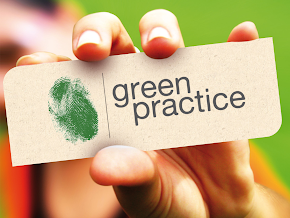 Our health depends on a healthy environment